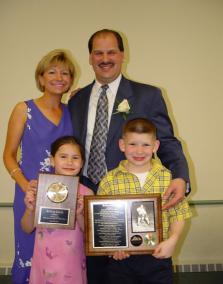 Jeffrey Dobek was a standout hockey player who excelled at every level in which he competed. He got his start in the Taylor Hockey Association when games were played on the outdoor ice rink at Northwest Park. And he finished his career as the all-time scoring record holder at United States International University in San Diego.

As a Squirt travel player on the highly regarded Little Caesar’s AAA Hockey Club, he scored an amazing 156 goals and 243 points in a single season. He also was the league-leading scorer with the prestigious Detroit Junior Wings. After leading his college team to a Top-20 ranking in Division I, he was about to make the jump to pro hockey when a broken ankle ended his playing career.

Dobek, who continues to live in Taylor, is the co-founder of VerTec Inc., a visual communication firm in Allen Park. He has been an outstanding coach of youth hockey since 1999. His brother, Robert, was inducted to the Taylor Hall of Fame in 2003, making them the only brother combination in the hall.