A few tears fell as those in attendance remembered the late Holly McGeogh, who was killed in Iraq in 2004. McGeogh, 19, died on January 31, 2004, when her vehicle was hit by an improvised explosive device near Kirkuk, Iraq. She was part of Company A, Fourth Forward Support Battalion, Fourth Infantry Division out of Fort Hood, Texas.

A memorial to McGeogh, placed in the front of City Hall along Goddard Road, was moved before the event. It had been too easily vandalized by passers-by. It was placed deeper into the complex, near other monuments in the Cameron Priebe Plaza. The campaign captured the hearts of many residents and business leaders, and the money to make the move was quickly reached - thanks in part to one anonymous donor of a significant sum of money. Fiore Enterprises and the Sakalian Family played a key role in the construction move. Tons of dignitaries were in attendance, but none made a more lasting impression than McGeogh’s mother, Paula Love, and one of the former members of her squad, Chris Eagling. Love feared that Taylor would forget Holly. But that isn’t going to happen. 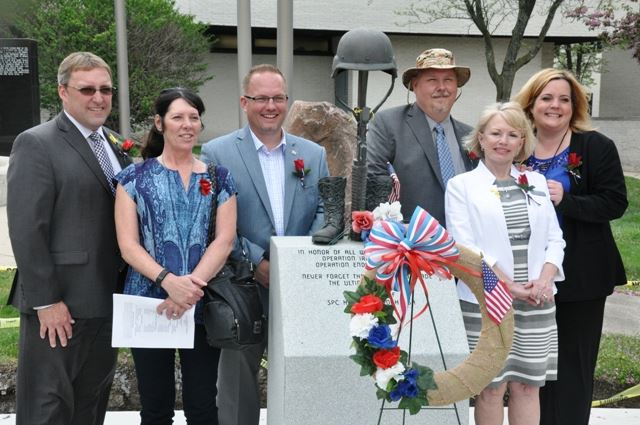 I’m happy she got to fulfill one of her goals, and that was to be a soldier, Love told the crowd. In every picture I’ve ever seen, she’s laughing, she’s smiling. That was Holly.

Eagling, one of McGeogh’s commanders in Iraq, lives in Negaunee in the Upper Peninsula, and traveled with his young son to Taylor for the ceremony. I am still, to this day, so very sorry that we couldn’t bring her home, he told McGeogh’s mother.