Zachary Taylor was born in 1784 on a farm in Virginia. His father had been a Revolutionary War officer who fought under George Washington. Young Zachary had always longed to follow his father’s footsteps of a military career.

At age 23, he entered the Army as a lieutenant. He distinguished himself as a military genius in the War of 1812, the Sauk Indian Wars in Wisconsin and the Seminole Indian Wars at Lake Okeechobee. Finally, Taylor was placed in command of the Army’s department of the Southwest at Fort Smith, Arkansas.

In 1846, the conflicts with Mexico had reached the breaking point and Commander Taylor was sent to the Rio Grande to protect the American citizens and the territories from the marauding Spaniards. General Taylor led his 4,000 American troops against Santa Anna’s 25,000 Mexican army fighters. Though vastly outnumbered, "Old Rough and Ready Taylor" soundly defeated the Mexican army. The victory gave the United States much new territory, including Texas, Southwest and West Coast lands that would someday become California, New Mexico, and other western states. Zachary Taylor was a national hero and was idolized by the entire country. 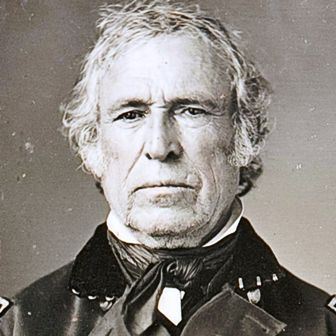 Taylor’s popularity as a military hero vaulted him into the national spotlight and he was elected President of the United States in 1849. After serving only 16 months in office, he became ill while attending a special ceremony on July 4, 1850. The occasion was the laying of the cornerstone of the Washington Monument. President Taylor died in the White House on July 9, 1850. Millard Fillmore, Vice President, completed Taylor’s term of office as the 13th President of the United States.

Taylor Township was originally named in honor of Zachary Taylor, a national military hero in the 1840s. In 1849, he would be elected the 12th President of the United States.

Taylor Township was organized on March 16, 1847. The area comprised 24 square miles that were originally part of Ecorse Township. The first Township meeting was held on April 5, 1847, at the home of Richard Sutliff. There were 44 in attendance at the important gathering, at which time they elected their township officers. It would not be until 1968 that Taylor would become a home rule city.